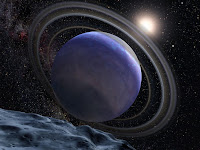 Today's Irish Times contains a couple of great articles on exoplanets, planets beyond our solar system, and the involvement of Irish scientists and institutions in their discovery. The search is on to find an Earth like planet somewhere in our galaxy and, subsequently, studying the possibility of discovering life on these planets. Dick Ahlstrom, and his team, have been publishing some brilliant articles in the science section of the Irish Times lately. Keep it up guys. Below is a short extract from one of the articles, Up Close With the Planet Hunters. Click here to read the article in full or here to read about how Irish scientists are leading the exoplanet race. At least now Captain Kirk will have some places to "boldy go to" during his holidays!

"THE MILKY Way galaxy may be littered with Earth-like planets, according to new research. Far from being a rarity, up to 20 per cent of stars similar to our Sun may be orbited by rocky, watery planets. And where there is water, can we assume there is life? Certainly the more Earth-like planets with water that can be found, the greater the likelihood that we might find one that harbours life. Research findings issued earlier this week at the Royal Astronomical Society’s national astronomy meeting in Glasgow suggest that we will identify endless numbers of potential homes should we ever have to leave Earth – provided of course we develop a way to reach them. The search for exoplanets, planets that orbit stars away from our own solar system, has been a popular subject for astronomers presenting findings at the Society’s 2010 meeting. And exoplanets also feature in research that appears this morning in the journal Nature about a new more sensitive method for finding distant planets. The discovery of new exoplanets has become a near daily occurrence – with 446 found as of last Tuesday – since the first was found in 1995. " Read more .....