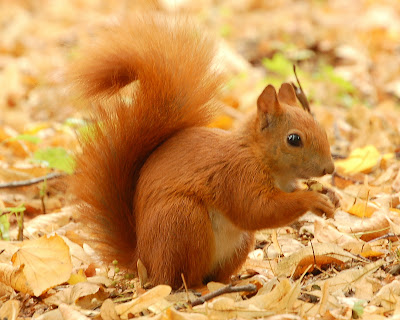 The red squirrel is one of Ireland's best loved mammals and definitely our best loved rodent. Yes, the red squirrel is a rodent, classified in the same group as mice and rats. Rodents are generally small mammals that have strong sharpened front teeth (incisors) which grow continually throughout the animal’s life. The red squirrel, or Sciurus vulgaris, is a small, reddish, arboreal (tree living) animal with a long bushy tail. It is smaller than the grey squirrel, which can also be found in Ireland. In winter its coat is thick and red, and it has a bushy tail and long ear tufts. The underside is cream or white. In summer, the coat becomes lighter in colour and the ear tufts are small and pale. The red squirrel is native to Ireland but it may have been re-introduced in the early 1900's after numbers had declined. Red squirrels can be difficult to find though, as they spend most of their time in the trees. Ireland also has only about 8% tree coverage – one of the lowest in Europe - so squirrels occur in pockets around the country. Red squirrels are particularly rare along the west and north coasts.
The red squirrel is found in broad leaf, mixed, and coniferous woods. It favours coniferous woodland, where it eats cone seeds, pollen, buds and shoots. It also eats berries, beech mast, fungi, fruit and nuts. It builds a rounded nest called a 'drey', using twigs, bark, leaves and grass. The red squirrel spends most of its time high up in the trees, while the grey spend more time on the ground. Squirrels are generally most active at dawn and dusk. Contrary to popular belief, squirrels do not hibernate; instead they store food to see them through winter.
Squirrels can breed twice in a season, in spring and in late summer, but usually only breed once. There are between one and six young in a litter. The young are born naked and blind. Young squirrels may stay with their mother until she has her next litter. Mortality is quite high, with only one in five surviving to their first winter. Adult squirrels have few natural predators, as they are far too quick and agile for most. In other countries, there have been reports of pine martens catching and eating red squirrels.
In Ireland and Britain, red squirrels are in serious decline, due to habitat loss and competition with the grey squirrel (introduced to Ireland in 1911), which is larger and stronger than the red squirrel, and is able to digest nuts and fruit before they are ripe. It also carries a virus which may be transmitted to red squirrels. So as greys expand their range, reds are pushed to the margins. To help increase range and numbers, some red squirrels have been moved to safe areas of forestry in the west, where there are currently no grey squirrels.
Labels: Ireland's Fauna Ireland's Mammals Nature Notes

Tash said…
Are you sure grey squirrels were only introduced in 1991?
I remember hearing about the threat to reds from greys back when I was in primary school. I left primo in 1988.
9:21 am

Unknown said…
Woops, correction made. It was actually thought to be 1911 when a small population was released in Castleforbes, County Longford. Apologies, I've been meaning to change that for ages!
5:17 pm