The Corn Snake by Tom Crampton 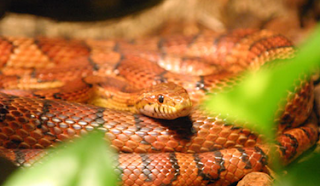 The Corn Snake or Red Rat Snake is a North American species of rat snake that subdue their small prey with constriction. The name corn snake comes from the fact that they have a maize-like pattern on their bellies and because they were found in corn fields. Corn snakes are found throughout the southeastern and central United States. Their docile nature, reluctance to bite, moderate adult size 1.2–1.8 meters, attractive pattern, and comparatively simple care make them popular pet snakes. In the wild, they usually live around 15–20 years, but may live as long as 23 years in captivity. They are non-venomous. The Common Corn Snake lives in the south eastern United States, and is distinguished by having brownish-orange skin with orange/red saddles, the saddles having black borders, and usually a black and white underbelly. The Great Plains Rat Snake or Emory's Rat Snake is found in the United States from Nebraska to Texas, and into northern Mexico.
Labels: Junior Frog Blog Reporters Pupil Work Reptiles