"Alien" Bacteria Use Arsenic Instead of Phosphorus 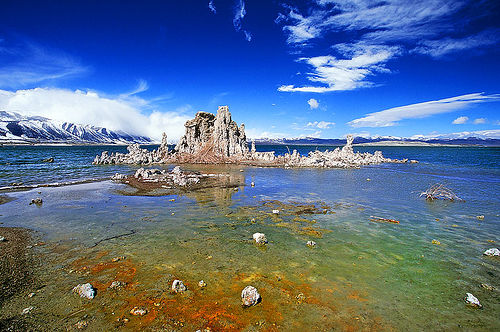 As predicted in yesterday's post, NASA have revealed that they have found a new type of extremophile bacterium which can use arsenic instead of phosphorus in its DNA, fats and proteins. Until now, scientists believed that life depended on six elements: oxygen, hydrogen, carbon, nitrogen, sulphur and phosphorus - with arsenic actually being extremely poisonous to most living things. This new bacterium, which has been christened GFAJ-1, breaks the rules in this regard and can utilise the poisonous element, instead of phosphorous, to survive. The bacterium is only found in once place on Earth, Mono Lake in California (pictured above) and, we are told, its discovery may well lead to a whole new branch of microbiology. However, the hype surrounding this discovery seems to have been inflated, and the perceived scientific implications (most notably that life doesn't necessarily rely on the six elements we once believed, thus living things could be found on planets and moons that don't have these elements or have very extreme environments) are not as significant as NASA has portrayed. So it seems we will have to wait a little longer for NASA to actually find aliens, and hopefully their next alien discovery might not be on Earth!
The Guardian have a number of great pieces on NASA's discovery here and here.
Labels: Today's Science News Todays Science News