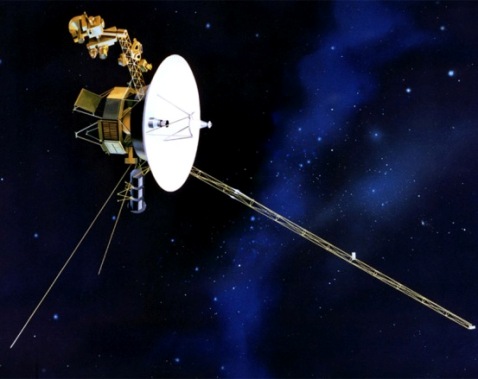 Voyager I was launched on September 5th 1977, on a mission to study the outer edges of the solar system and, eventually, interstellar space. Amazingly, 33 years after its launch Voyager I has now reached the outer boundarie of the solar system, photographing Jupiter and Saturn close up along the way. Voyager I is now about 10.8 billion miles from the sun, traveling in a region of space known as the heliosheath, a turbulent area between the sphere of space influenced by the sun and magnetic forces from interstellar space that lies beyond.
Flying along at about 38,000 mph, Voyager 1 is continuing its  path towards interstellar space, where its mission is expected to last at least another 5 years. However, NASA believe that the spacecraft may have enough plutonium power to last it to 2025. It is currently so far from Earth that radio signals, traveling at the speed of light, take 16 hours to reach the spacecraft. Its twin, Voyager 2, is traveling at a more leisurely 35,000 mph and will leave the solar system in a southerly direction a few years after Voyager 1. To see some of the amazing photographs taken by the Voyager Spacecraft click here.
Labels: Astronomy Space Exploration Today's Science News Todays Science News