In this month's Irish Times BANG science supplement, Dick Ahlstrom looks at what could happen if the Gulf Stream stopped? 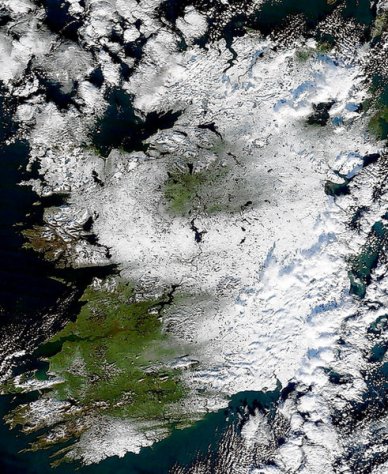 A frozen Shannon, white Christmases and icy noses. If the Gulf Stream current stopped we could always have freezing winters like those in Siberia, writes Dick Ahlstrom
Ireland had some extreme weather during early December but this is nothing compared to how things would be if, for some reason, the Gulf Stream ocean current stopped. Without its warm waters flowing past us we would be plunged into long freezing winters with average annual temperatures similar to those in Siberia or northern Canada.
Winter would start in August and not finish until May. We would get metres of snow a year and our lakes, rivers and even the mighty Shannon would freeze over. We would all need triple glazing and thick insulation in our homes to keep warm and we might have to start sharing the neighbourhood with polar bears.
Just how much the Gulf Stream (and its extension the North Atlantic Current) does for us can be seen by looking at a globe and noting our latitude on it compared to Canada’s Hudson Bay.
The town of Churchill, on the bay’s western shores, lies at 55 degrees north and has an annual average temperature of -7 degrees. Derry lies on the same line of latitude and has an annual average of nine degrees.
Scientists have speculated about what would happen if the Gulf Stream slowed or even stopped and the predictions all suggest big changes for Ireland. If the warm current, which also moderates Britain’s climate and allows certain Norwegian ports to remain ice free through winter, stopped or even slowed we would begin to experience winters like those in Churchill in Canada.
The severe winters would mean that a white Christmas would be virtually guaranteed. We would lose much of our agriculture but we could get into winter tourism with dog sledding and snowmobiles.
But what might cause such a dramatic event? Climate change may provide a switch that could shut off the Gulf Stream. A strong warming trend could bring changes that would interfere with a global system of ocean currents known as the thermohaline circulation.
It is like a giant conveyor belt that moves water around the planet. Two things drive the circulation, temperature differences and the saltiness of the water, hence its name, thermo for temperature and haline for salt.

It takes water up to 1,600 years to complete a circuit. And the currents that are driven by the circulation have a profound effect on climate.
If climate change continues unchecked and average air temperatures carry on rising it will speed the meltdown of ice reserves around the world. Scientists monitoring ice loss have found that all five continents show shrinking glaciers. White-topped Kilimanjaro in Tanzania is predicted to lose all its snow and ice within 30 years.
Ice loss sends cold, fresh water down rivers to join the oceans, changing the temperature and salinity of the waters. Yet these would only cause a tiny change compared to what would happen if the world’s two biggest ice reserves began rapid melting.
Antarctica is the largest single mass of ice on earth, making up about 60 per cent of all the fresh water on the planet. If its 30 million cubic km of ice melted it could raise ocean levels by 70m; enough to swamp our coastal cities.
Greenland has the second largest body of ice, with more than 2.8 million cubic km in thicknesses up to 3km deep. If this ice melted it would push sea levels up by more than seven metres.
Scientists battle over whether either of these giant ice boxes are likely to melt because of climate change. There is no doubt however that they are losing ice much faster than in the recent past.
Most of Antarctica’s ice burden or “ice sheets” are stable and remain very cold. Things are different in western Antarctica and along the Antarctic Peninsula where ice is being lost.
Nasa uses satellites to monitor ice loss. Ground observations also show that water flowing down to the base of the ice sheets is working like a kind of lubricant, making the sheets slide more easily into the sea.
The real concern for Ireland however is Greenland. It is now losing many cubic kms of ice every year as temperatures rise. Giant “puddles”, more like lakes, of water form on top of the ice in the warmer summers and this seeps down through cracks to where the ice touches the bedrock.
Satellites have shown that this encourages the ice to slide into the ocean. And this movement makes room for the ice behind to follow, speeding up the process.
This cold, fresh water is flowing into the ocean, raising sea levels by about 2mm a year. This is too slow to influence the thermohaline circulation but some scientists warn that we are near a “tipping point”, beyond which we move into unknown territory.
This point is reached when carbon dioxide levels in the atmosphere push up average temperatures to reach a critical point. These levels stood at 280 parts per million before the Industrial Revolution and have since risen to more than 430 parts per million.
The Stern report on the economic impacts of climate change warned that reaching levels of 550 parts per million would mean a two degree rise in average temperatures.
This might not sound like much but the average temperatures now are only about five degrees warmer than during the last big planetary freeze during the Younger Dryas about 12,500 years ago.
Scientists continue to struggle with their models and predictions about the future, with significant disagreement about what will happen.
But dramatic change can come very quickly. The glacial conditions that came with the Younger Dryas may have taken hold in a decade or less. Maybe we had better invest in good snow shoes.
Global cooling: When Earth turns into a snowball
If you think the recent cold snap was chilly imagine what it would have been like during a “Snowball Earth” event.
When these happened in the past the entire planet was covered in snow and ice, even down to the equator.
Ireland had -5 and -10 degrees two weeks ago but the average annual temperature during Snowball Earth events would have been about -50 degrees.
They think it would have averaged a balmy -20 degrees at the equator, with sea and land there covered in a thick slush during the “summer”.
Not all scientists believe in the Snowball Earth theory but there is some geological evidence for at least one event 650 million years ago and there could have been several.
Scientists have found what look like glacial deposits of rock and gravel (called moraines and eskers) in places where they were not expected.
These provide evidence that large glaciers must have existed in warm latitudes during periods in the past.
See snowballearth.org
Labels: Irish Times BANG