Where Have All The Passionate Physics Teachers Gone?

This excellent piece first appeared yesterday on the Guardian Science Blog. It is written by Alom Shaha, a physics teacher in the UK, and he asks simply "where have all the passionate physics teachers gone" and pleas for more physicists to become teachers. An excellent post from one of the UK's best teachers and an inspiration to us all. This post has been published here with the author's permission. 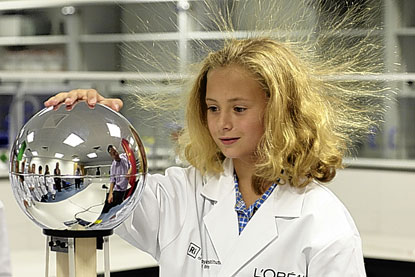 My name is Alom Shaha and I am a physics teacher. Far too often, the response I get from introducing myself like this is, "I hated Physics at school", to which I usually reply, "You wouldn't have if I had taught you!"
I'm not just being cocky. Physics is a stimulating, beautiful, exciting subject and I don't think it's that hard to get schoolchildren to appreciate at least some of those qualities. It depresses me that any physics teacher would do such a poor job that his or her students leave school "hating" a subject that covers some of the most interesting and important ideas humans have ever had.
I fear I'll be meeting more and more people who will tell me they hated physics at school – and it won't be their fault. And it won't be the fault of their physics teachers either, because, strictly speaking, these people won't ever have had an actual physics teacher. They will have been deprived of this because of a crisis in English education: there simply aren't enough physics teachers to go round. Instead, the subject is far too often being taught by "non-specialists", teachers who are usually qualified in chemistry or biology. Many of these teachers have not studied physics beyond GCSE and some even actively dislike physics.
Physics is a challenging subject and to appreciate it fully, you need to have a good grasp of that other subject many people "hate" at school – mathematics. In most cases, learning physics requires a lot of effort, not just on the part of the students, but also on the part of the teachers; it's not something that most of us can just "pick up" and it's not something that's easy to teach. Being good at physics doesn't necessarily make you good at explaining it to other people, and the best physics teachers are not always those with the highest qualifications but those who make the most effort to find ways of explaining what are often very complex, abstract ideas. It really helps to have a love of your subject, because when you're in love you want to tell everyone all about it.

My students know how much I love my subject. Sure, some of them might giggle about what a geek I am, but ultimately, my unreserved adoration of physics is something that enhances my teaching because it's a constant reminder that I care about what I'm doing. It's clear to me that my own enjoyment of teaching physics enhances my students' enjoyment of their lessons. I don't think I'd make such a good biology or maths teacher (even though I reckon I could probably teach both at GCSE if I had to) because I simply wouldn't be as passionate.
Numerous surveys have shown that most scientists cite "a teacher" as the reason why they became scientists. In my own case, I hated physics lessons until I started my GCSEs and got a new teacher, Mr York. It was in his lessons that I fell in love with physics. I am indebted to Mr York not just for teaching me physics but for teaching me how to teach it.
Unfortunately, the current shortage of physics teachers means that many children will never have a chance to meet a Mr York. The problem is particularly severe in the state sector where something like one in four schools doesn't have a specialist physics teacher. Things look likely to get worse. The Institute of Physics has calculated that "1,000 new physics teachers are needed each year for the next 15 years to bring the number of physics teachers up to level of chemistry and biology teachers". At the moment, only around 600 new physics teachers enter the profession each year, less than the number we need to "break even". How can this have happened in a country which has produced some of the finest physicists in history?
I've been lucky to have had a varied career, from working in politics to being a TV producer, but teaching physics is by far the most rewarding, satisfying job I have ever had. People often ask me why I left the "glamorous" world of television to go back to teaching. The honest answer is that I have never felt so good about myself as I do when I am teaching. For me, being a teacher satisfies a yearning that many of us have: to be doing something useful in the world. At the risk of being cheesy, I teach because "Mr Shaha" is the best part of me, the man I want to be.
So, this is a plea to anyone out there with a physics degree – whether you're a new graduate with no idea what to do for a career, or someone who graduated years ago and is stuck in a job you don't really like – please consider becoming a physics teacher. I can't promise that it'll be easy, but I can promise you that, if you get it right, teaching physics will make you fall in love with the subject all over again and, perhaps more importantly, you'll be doing your bit for the future of physics in this country.
The original post can be found here. Contact Alom via Twitter here.
Labels: Communicating Science Education News Physics Stuff