When will they invent ... the Space Elevator? 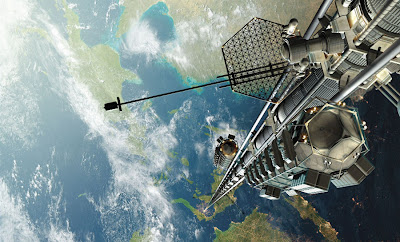 Transporting astronauts and supplies to and from the International Space Station (ISS) has never been cheap. And it’s the same with the launching of satellites to low-Earth orbit – the area between 100 and 1,200 miles above the Earth.

When NASA launched the Space Shuttle in 1981, the first reusable space craft, it dreamed of an affordable means of transporting people and materials to and from the edge of our atmosphere and specifically the ISS. However, that wasn’t the case as each Shuttle launch cost about €350 million, equating to around €16,000 per kilogram. Since the retirement of the Shuttle fleet earlier this year satellites, astronauts and supplies are being launched in to low-Earth orbit using rockets, eg Russia’s Soyuz launcher. But a typical Soyuz rocket launch costs around €47 million yet is still considered the most cost-effective means of reaching space.

Could there be a cheaper way to launch satellites and transport people and materials to the ISS and beyond? Well, one interesting alternative to rockets being proposed is the construction of a space elevator.

The central idea behind a space elevator is a long (very, very long in fact) cable going from a base station at the surface of the Earth – most likely somewhere along the equator – to a huge counter-weight in geostationary orbit (look that one up) about 100,000km from the surface of the Earth (that’s almost a quarter of the distance to the moon). This counter-weight will spin at the same speed as the Earth, keeping the cable stretched tight and prevent the cable from falling back down to the surface. Moving along the cable would be one or more climbing units, carrying the payload in and out of low-Earth orbit. It sounds cool, right? Well, scientists need to figure out a few things first.

To begin with, they must be able to manufacture a cable long enough and, more importantly, strong enough to be able to carry its payload. Amazingly, steel, titanium or other metals wouldn’t be nearly strong enough or, indeed, flexible enough for the job.

Some scientists have suggested using a paper-thin carbon nanotube ribbon for this purpose (look that one up too, it’s pretty cool). This innovative and revolutionary material is extremely robust, flexible, conducts electricity and would be the ideal material for the 100,000km long cable.

The counter-weight would need to be very heavy to ensure it maintains orbit. Some scientists have suggested using an asteroid for the purpose, while others suggest a man-made counter-weight – perhaps made from the materials which transport the nanotube ribbon into space.

The base station would need to be relatively mobile, allowing the cable avoid space debris or incoming meteorites if needed. To achieve this scientists suggest that the base station should be in the Pacific Ocean, near the equator.

This would put the base station directly below geostationary orbit, allow the base move more easily and keep it away from potentially destructive hurricanes and storms.

While all this sounds a little bit like science fiction, the construction of the first space elevator may not be that far away. Most of the technology needed already exists; except for the long carbon nanotube cable (the longest carbon nanotube made so far is 18.5cm). However, with advances in nanotechnology, the space elevator may well replace rockets within 50 years. Space elevators would prove cheaper to operate than rockets with scientists estimating a launch cost of just €500 per kilogram. This would make transporting materials into space a more frequent occurrence and would have enormous economic and technological advantages. The estimated cost of constructing an elevator is around €15 billion.

Check out all my articles from BANG here.
Labels: Irish Times BANG Nanoscience Science Week 2011 Space Exploration When Will They Invent ...? Why Haven't They Invented ......

Leifer said…
Hi,
I won't be the first to point this out, and probably not the last.
In order for the Space Elevator (SE hereafter)to have any surplus lift capacity, the majority of its mass has to be beyond geostationary orbit. For all the mass going to the ground, it has to be matched by an equal mass - an equal upward pull, to be more accurate - or else everything comes crashing to the ground. And in that crash, you're talking about many thousands of miles of stuff falling out of the sky.

So while there would be a base station at the geostationary point for convenience' sake (launching telecom satellites is a snap: just shove them out the door and they float away), there would still be many thousands of miles of cable to go before you finally got to the very end of the SE. It requires a lot more construction and material but affords some more economies, too. Launching transit vehicles into higher energy paths or even translunar orbits is simply a matter of riding the cable out to the appropriate spot at the appropriate time, and letting go. Retrieving returning vehicles could be as simple.

Current materials technology is not quite up to the challenge, but you're right about carbon nanomaterials. Those are the closest we've gotten so far. Jiggering the geometry (tapering the cable from thick to thinner as it approaches the ground so there's less weight to hold up) could conceivably make up the deficit.

The cost to raise an object to orbit would be the electricity to operate the elevator (bear in mind that even at 1,000 miles per hour, a trip to geostationary would take nearly a day), whatever it takes to keep the payload or person alive/functional, and amortized costs of construction.

I sure would like to see one of these things. Generally speaking the countries that lie on the equator are pretty poor. Can you imagine the economic impact of a poor country suddenly becoming the center of the space industry? Suddenly Kenya is a world power, or tiny Pacific island nation Kiribati is the hub of global communications.

Anyway. Thanks for your article.

I comment on all things, sometimes space travel, at www.uponfinding.blogspot.com
2:25 pm

Colleen said…
I'm surprised to not see a mention of Arthur C. Clarke's The Fountains of Paradise.
4:39 pm