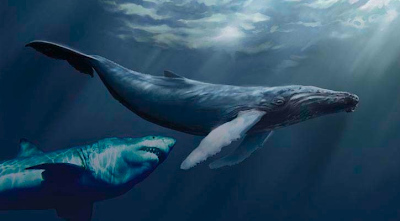 Scientists have uncovered a fragment of whale rib bone which provides a rare glimpse into the interactions between prehistoric sharks and whales, some 3 to 4 million years ago. The fossil has three distinct tooth marks indicating the whale was once severely bitten by a strong-jawed animal. Scientists have studied the distance between the teeth marks, some 6cm, and believe the attacker was the enormous giant toothed shark Carcharocles megalodon or another similar species of large shark which was alive at that time. The whale appears to have been an ancestor of a great blue or humpback. Scientist know the whale wasn't killed by the attack immediately though but the shark likely took a nice chunk out of it!

Scientists know the whale survived the attack because most of the fossil fragment is covered with a type of bone known as woven bone, which forms rapidly in response to localized infection. However, the presence of the woven bone indicates the healing was incomplete and the whale did eventually die (most likely as a result of the Megalodon attack) probably between two and 6 weeks later.

Based on the curvature of the shark's jaw, as indicated by the arc of the impressions of its teeth, the scientists believe the shark was relatively small, possibly around 8 meters long.

In the realm of palaeontology, only a handful of fossils show these kinds of interactions, Stephen Godfrey, the scientist who discovered the fossil, explains.

"There are lots of bite marks on fossils showing where the animal died and its carcass was scavenged. This fossil is one of a very few examples that shows a trauma clearly attributed to another animal, yet also shows the victim survived the event."

Don't worry though, Megalodon is long extinct and it's now safe to go back in the water! To find out more about Megalodon click here to see a previous Frog Blog post.
Labels: Palaeontology Today's Science News