Irish Times BANG: You're one in seven billion. Feel special?

This article appeared in this month's edition of BANG, the Irish Times science mag for teens. It's written by Aoife McLysaght, a lecturer of genetics in Trinity College Dublin. 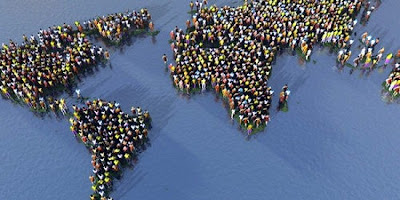 As of Halloween, you’re one in seven billion. That was the day chosen by the UN to announce we had reached this global population milestone.

Our species, which started as a small population in east Africa about 150,000 years ago, started to migrate around the world about 70,000 years ago. Slowly but surely we spread over the whole globe, increasing in numbers and adapting to new environments.

We are, all of us, related – one enormous family of seven billion members.

We don’t have records of births, marriages and deaths going back to the origins of humans, but we do have a wonderful alternative. Our genes carry a record of our past. You inherited your DNA from your parents, who got theirs from their parents, and so on, right back to the beginning of life. Measuring the overall similarity of DNA sequences reveals how closely related any two individuals are – that is, how many generations you have to go back before you find an ancestor in common.

As people moved around the globe, they carried their genes with them. On this worldwide scale, asking the question “who are you related to?” is the same as asking “where do you come from?” Using DNA, we can all trace our ancestors back to that small population in east Africa.

The first numerically significant group of Homo sapiens to leave Africa consisted of about 1,000 individuals. They migrated and settled first in Asia, where they found Neanderthals (Homo neaderthalensis) already living. Apparently these early humans found Neanderthals reasonably attractive, because some of them mated and we can see small traces of Neanderthal DNA present in the DNA of present-day Europeans and Asians.

After some time, a group from within this migrant population decided to move again, some going east, some west. Time and again, small groups from within the larger groups decided to move on and establish a new group. Each time they did so these founders carried their particular genes with them. Tracing back genetic ancestors allows us to retrace the steps of early humans as they spread west into Europe, south through Asia into Australia and the Pacific Islands, and east into the Americas across the Bering Strait.

This history is written in our genes. Within each of us our DNA reveals our individuality – our unique inheritance from our specific set of ancestors back through the generations. Sitting alongside that individuality is our shared inheritance from a relatively small group of people who lived in Africa 150,000 years ago.

The original article appears here. Many thanks to Aoife who gave an excellent lecture to the pupils of St. Columba's College last night on the 'Evolution of Development'. She rocked!
Labels: Irish Times BANG