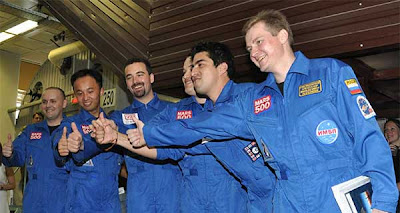 The European Space Agenecy's (ESA's) 520 day simulated mission to Mars is over. The six strong highly trained crew, made up of three Russians, two Europeans and one Chinese citizen (Alexander Smoleevskiy, Sukhrob Kamolov, Alexey Sitev, Diego Urbina, Romain Charles and Wang Yue), "landed" back in Moscow after over a year and a half in isolation. The purpose of the investigation was to see how the human mind and body would cope on a long-duration spaceflight.

The mission began way back on June 3rd 2010, at the Institute of Biomedical Problems in Moscow and followed the stages of a real mission to Mars: the long flight, insertion into orbit around the planet, landing, surface exploration, return to orbit, a monotonous return flight and arrival at Earth. During the ‘flight’, the crew performed more than 100 experiments, all linked to the problems of long-duration missions in deep space. To add to their isolation, communications with mission control were artificially delayed to mimic the natural delays over the great distances on a real Mars flight.

ESA’s Director General Jean-Jacques Dordain greeted the crew from Paris after they stepped from their module.

“I welcome the courage, determination and generosity of these young people who have devoted almost two years of their lives to this project, for the progress of human space exploration.”

“One year and a half ago, I was selected by the European Space Agency to be part of the Mars500 crew. Today, after a motionless trip of 520 days, I'm proud to prove, with my international crewmates, that a human journey to the Red Planet is feasible".

The question is now - where to next?
Labels: Space Exploration Today's Science News