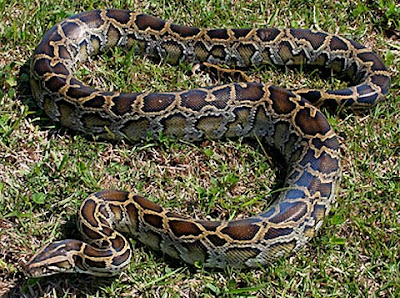 The increasing number of Burmese Pythons in the Florida Everglades is resulting in a dramatic drop in the numbers of small mammals in the area, a new study has revealed. A non native species, Burmese Python's have become one of the most dominant predators in the Everglades, devouring many small mammals like racoons and rabbits as well as larger mammals like bobcats and deer. There has even been cases of mammals attacking and eating aligators (with horrific effects).

The exact number of Burmese Pythons in the Everglades is unclear - over 900 were removed from the Florida's National Park in 2009 - but they have quickly become the dominant species there. Their presence was only first recorded in 2000 after many individuals bought the animals as pets and released them when they grew to their mammoth size (they are the 6th largest snake in the world and can grow up to 6m in length). Earlier this month, it was announced that there will soon be a ban on importing the pythons, but many feel it's too little too late.

The new study, published in the journal 'Proceedings of the National Academy of Science' (PNAS), studied the numbers of mammals observed as road-kill in the 90's to similar statistics in the 00's. They found that the numbers of raccoons and opossums observed dropped by nearly 100% while there was a drop of over 94% in observations of white-tailed deer. The number of bobcats in the area is believed to have dropped by 87.5%. The study in the 90's found that rabbits were amongst the most common small mammal observed yet no rabbits were seen during the more recent road-kill survey. Many of these animals are known to graze on the water's edge, so may have been ambushed by the ferocious predator. The researchers also found that the declines in mammals coincided geographically with the spread of Burmese Pythons.