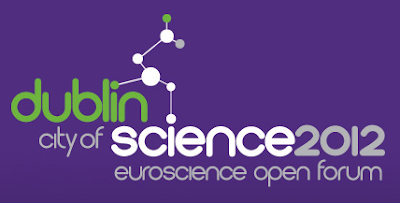 The varied members of Ireland's science community crammed in to the Convention Centre Dublin this morning to officially launch Dublin as the European City of Science 2012. Politicians, scientists, educators, science journalists, bloggers, policy makers and others were treated to a slick and inspiring launch, which genuinely created an air of excitement for the year ahead. The launch was MC'd by Irish comedian, TV presenter and science enthusiast Dara O'Briain (with whom I had a great chat to about science blogging and the nature of effective science programming), who spoke of his love of science and what it means for him to act as a science ambassador for Dublin City of Science 2012. He was joined on stage by Patrick Cunningham (Chief Science Advisor to the Government), Richard Bruton (Minister for Jobs, Enterprise & Innovation), Seán Sherlock (Junior Minister in the Department of Jobs, Enterprise & Innovation), Aoibhinn Ni Shúilleabháin (Dublin City of Science 2012 Ambassador) and Andrew Montague (Lord Mayor of Dublin & former Veterinary scientist). Each spoke with passion on what the City of Science title meant to them and of the 160 events planned during the "celebration of science" to come over the next 11 months.

So what of these 160 events? Many of these will centre around the excellent science hub that is Science Gallery. Their 2012 programme of events is jam-packed with a brilliant range of exhibitions including Happy, Hack the City & the Dublin Maker Faire. But that's not all. This year's St. Patrick's Day Festival will have a science theme, 'Future Visions' & 'Amaze Your Head' will explore science using film, the Ark Project will fuse art and science through a series of programmes, 'Arcade Science' will bring science images to building gables and billboards and the National Concert Hall will present the 'Icarus: At the Edge of Time' - a musical adaptation of Brian Greene's book.

In July of this year Dublin's Convention Centre will play host to the European Science Open Forum (ESOF) - a biennial pan-European meeting dedicated to scientific research and innovation. It is expected that over 5000 scientists, business leaders, senior EU and Irish government officials and the science media will come together over the week in what is an extremely full programme of events. Some of the key-note speakers confirmed are top-drawer and include Rolf-Deiter Heuer (Director General of CERN), Craig Venter (the first man to create synthetic life forms), Jean Jacques Dordain (Head of ESA), three Novel Laureates (Peter Doherty, Jules Hoffman & James Watson), Mary Robinson, Bob Geldolf as well as giants of Irish science like Jocelyn Bell Burnell. Additional confirmed speakers include Bruce Albert (Editor of Science), Phil Campbell (Editor of Nature), Deborah Blum (former Pulitzer Prize winner), Ed Yong (Science Blogger at Not Exactly Rocket Science) and Dara O'Briain. ESOF 2012 is truly set to inspire, amaze and put Ireland firmly at the centre of world science.

The only word that comes to mind is WOW! The Dublin 2012 team deserve so much credit for creating such a full and enthralling programme of events, not only for the week of ESOF but for the whole year. Now it's over to you - the public (from 1 to 100) - to engage with the programme of events and discover that science is not boring but a truly wonderful field that can entertain and excite. I have no doubt you will. As a science educator, I hope I the programme of events will help to encourage more students to science, technology, engineering and maths subjects, both at second level and third level.

This is a wonderful opportunity for Dublin and Ireland and I can't wait for the events to begin! Visit the Dublin City of Science Website for more information or follow them on Twitter!
Labels: Exhibitions Science Events Today's Science News