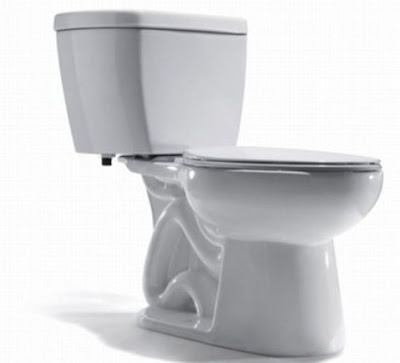 Flushing the toilet with the lid open can cause the spread of harmful bacteria, according to a new study by the Microbiology Department at Leeds General Infirmary in the UK and published in the International Journal of Hospital Infection. The bacteria in question is Clostridium difficile, a bacteria which can cause severe cases of diarrhoea.

The researchers used faecal suspensions of C.difficile, to measure the levels of the bacteria in the air and on surfaces (like towels, sinks etc) after flushing the toilet. To compare, they used both lidless and lidded toilets.

They found that air samples 25cm above a lidless toilet, which is about the height of the handle, contained the harmful bacteria, with the highest numbers coming from samples taken immediately after flushing. As one might expect, they also found that flushing the toilet with the lid on reduces the spread of the bacteria - by as much as twelve times!

Outbreaks of C. difficile in hospitals have caused several fatalities, including seven cases in Irish hospitals since 2007. C.difficile can be difficult to control in a hospital setting and they can linger on practically any surface.

The researchers conclude by suggesting that lidless toilets not be used in hospitals and other healthcare facilities in future to reduce the spread of the potentially harmful bacteria.
Labels: Diseases Today's Science News