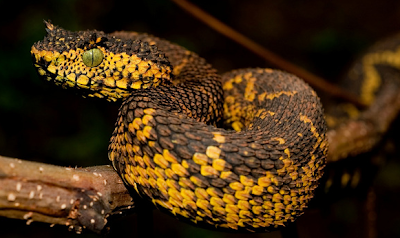 Scientists have discovered a previously unknown species of snake during a recent biological survey in Tanzania. A species of bush viper, the new snaked goes by the name of Matilda's Horned Viper (Atheris matildae), and is described as having hornlike scales above its eyes and measuring approximately 60cm in length. The Wildlife Conservation Society (WCS) researchers who conducted the survey named the new species after the daughter of study co-author Tim Davenport, the director of WCS's Tanzania Program.

The brightly coloured viper is only found in a small stretch of remote forest in a mountainous region in south-west Tanzania. The area is already severely degraded as a result of logging and charcoal manufacture, and the quality of the habitat in continuing to decline, according to the study authors.

The researchers have kept the exact location of the snake's habitat a secret to protect the species from poachers who illegally hunt rare exotic animals. Animal trafficking is big business in Tanzania and this rare snake could easily be sold as pets. Poaching is a major threat to wildlife in Africa, more so than disease or deforestation. The new species is soon to be classified as endangered by the International Union for Conservation of Nature.

The discovery of Matilda's Horned Viper is described in the December issue of the journal Zootaxa.
Labels: Today's Science News