The Irish Times today began a new series of articles on the Heroes of Irish Science. The first looks at the life and works of the Irish astronomer Jocelyn Bell-Burnell, who discovered pulsar stars, and is written by Ronan McGreevy. 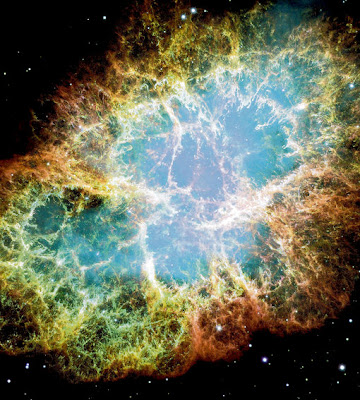 THE ASTRONOMER Jocelyn Bell-Burnell is one of Ireland’s most accomplished scientists. While still a research student she discovered pulsars and went on to become a distinguished scientist who made important astronomical discoveries.

She is a true hero of Irish science for her many accomplishments and for her ongoing contribution to a better public understanding of science. Her discovery of pulsars is one of the famous stories in science and it is also one of the most infamous.

In 1967 Jocelyn Bell was a 24-year-old PhD student from Belfast, reading radio astronomy at Cambridge University and examining newly-discovered quasars (quasi-stellar radio sources), incredibly bright and incredibly compact structures of light and energy at the centre of galaxies. She spent months reviewing print-outs from a radio telescope when she noticed small rhythmic blips on the paper one night in July.

The blips turned out to be signals from a radio source which had never been conceived before, let alone discovered. At first it was called – half in jest, half with a nod to the remote possibility that they might be signals from intelligent alien life forms – Little Green Man 1 (LGM-1).

On December 21st that year, Bell, as she was then, discovered a similar pulse, this time radiating from a different part of the galaxy. There couldn’t be two alien life forms radiating similar but different frequency pulses from opposite ends of the universe. It had to be a natural phenomenon.

The signals turned out to be pulsars (pulsating radio stars). The announcement was made to an astonished scientific world in Nature magazine in 1968. Six years later Prof Bell-Burnell (she married fellow scientist Martin Burnell in 1968), was denied a Nobel Prize for the discovery. Instead, her supervisor, Prof Antony Hewish, became the first astronomer to be awarded the Nobel Prize in physics, which he shared with Martin Ryle, the then Astronomer Royal and pioneer of radio telescope technology.

It remains a cause célèbre of modern science. Here was a young scientist and a woman in a male-dominated profession, denied the ultimate prize in science. Though many took up the cudgels on her behalf, Bell-Burnell has always been admirably philosophical about it. Research students do not usually win Nobel Prizes, however noteworthy their discoveries.

Hewish himself described it as crediting the discovery of the New World to the look-out who first spotted land on Christopher Columbus’s expedition, though Bell-Burnell had a part in designing the experiment.

The decision was not fair, she says, but a lot of things in life are not fair and besides, she has had a successful career, Nobel Prize or No-Bell Prize, as it was deemed at the time. “It is an awful waste of time and energy to be grieving over something that you can’t do anything about,” she says.

Bell-Burnell had already moved several times after leaving Cambridge by the time the Nobel Prize was awarded in 1974. After a spell at the University of Southampton, she joined the Mullard Space Science Laboratory at University College London working on the Ariel 5 satellite which was launched in 1974 to study X-ray astronomy. “I was very, very lucky. It ( Ariel 5 ) was hugely successful. I found myself wishing somebody would invent a Lord’s Day observant satellite so we could get a day off. It was phenomenally exciting.”

There have been many compensations, not least a slew of honours, most notably when she was made a Dame in 2008 for her work in science.

It was followed by her becoming the first female president of the Institute of Physics, which operates in the UK and Ireland. She has been a recipient of the Oppenheimer Prize and the Michelson Medal and holds several honorary doctorates.

She is also known for her championing of women in science and for her Quaker faith, which remains unmoved by the appliance of science. She has always been an advocate for the idea that science and faith can, as she put it, sit “lightly with each other” and it is part of the Quaker faith to believe that you can get closer to God by observing his creation.

She is critical of the well-known atheistic scientist Richard Dawkins saying he has a “fundamentalist view” of the subject.

“He believes science can prove anything. If it is not amenable to scientific proof, it doesn’t exist. If you care for a young child, for instance, is that science?”

Before Christmas she gave a lecture in Trinity College Dublin about the former planet Pluto. By her admission she was no expert on the subject of this cold and remote world when she was asked to chair a meeting of the International Astronomical Union in 2006 at which Pluto was downgraded to a minor planet.
Several hundred people turned up to hear her recount the often farcical circumstances in which delegates made the decision on the last day of the conference when many of the planetary scientists had gone home. However, with the benefit of hindsight, she still believes it was the right decision taken for the wrong reasons.
As perhaps the most famous living Irish astronomer, Bell-Burnell has been invited to chair several events at the Euroscience Open Forum 2012 meeting taking place next July in Dublin. She will host discussions on exoplanets and black holes, a subject very close to that of pulsars. She will also give a keynote address on a topic yet to be decided.