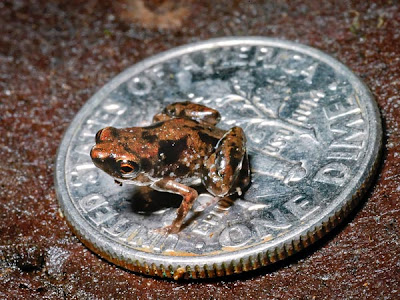 Researchers have discovered the smallest species of frog, and indeed vertebrate (or back boned animal), during a recent field study in Papua New Guinea. Paedophryne amauensis measures measures just 7.9mm from head to tail making it no bigger than a house fly (and two could fit across a smartie!). The newly discovered species lives amongst the leaf litter, perfectly adapted to its environment by its minuscule size. The researchers discovered the tiny frog species after collecting some lead litter and putting it in a bag.

Up until very recently the smallest frog species was believed to be the Brazilian Gold Frog, found only in the forests of Rio de Janeiro.The Paedophryne genus was only discovered in late 2011 and one must feel bad for Fred Kraus and his research team whose newly discovered species of tiny frog only held the title of smallest amphibian for a mere month. The new species, discovered by a group of researchers from various US institutions and led by Chris Austin from Louisiana State University, have a large surface area for their size and are prone to drying out. These frogs are not equatic and must stay in their moist leafy environment to avoid dehydration. They are likely a target for predators too, even large insects like scorpions, but their role in the ecosystem is obviously important as the numbers are high. Unusually the tiny species also doesn't have a tadpole stage either allowing them develop in the relative safety of the damp forest floor.


The results of the study are published in the Plos One Journal. Ed Yong has more information on the newly discovered amphibian. Click here to read.