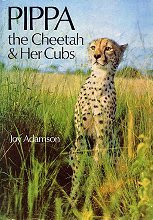 After we recently published a series of photos of the Desert Cheetah, Mr. Canning, one of the English Teachers in the school, reminded me of a series of books written by Joy Adamson. She was a naturalist and author, best known for her book, Born Free, which described her experiences in raising Elsa from cub to lioness. This book has become a worldwide best seller and has also been adapted for the screen. But Mr. Canning also told me about how she had rehabilitated a cheetah at her Kenyan home, Elsamere. Pippa the cheetah was raised as a pet and given to Adamson at the age of seven months in hopes that she could be released like Elsa was. Pippa had four litters before her death. Adamson wrote The Spotted Sphinx and Pippa’s Challenge about Pippa and her cheetah family. Adamson was murdered on January 3rd, 1980.
So why not check out some of the works of Joy Adamson and learn for yourself about the life of Pippa and Elsa.
Labels: Book Recommendation Book Reviews