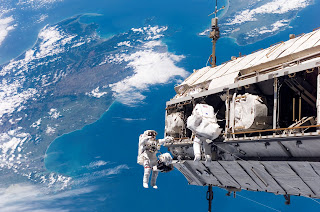 Today, in 1965, Voskhod 2 was launched into space carrying Alekei Leonov and Pavel Belyayev aboard. On the second orbit Leonov left the spacecraft through the air lock while still tethered to the vessel. He was the first man to climb out of a spacecraft in space. While outside, he took motion pictures and practised moving outside of the spacecraft for 10 minutes. Voskhod 2 made 17 orbits at about 110 miles (177 km) above earth. However, the mission was not without it's problems. Leonov had problems re-entering the spacecraft because his space suit had enlarged slightly. He had to let air leak out of the suit in order to squeeze back inside. The ship also landed off-target near Perm, in the Ural mountains, in dense forest. The crew spent the night in the woods surrounded by wolves before being located, and when the ground crew finally located them, it took a day to chop through the forest and recover them on skis. Click here to see a space.com account of the mission on the 35th Anniversary back in 2000. Ed White, a NASA Astronaut, made the first American spacewalk on 3rd June 1965 during the Gemini 4 mission.
Labels: Astronomy On This Day