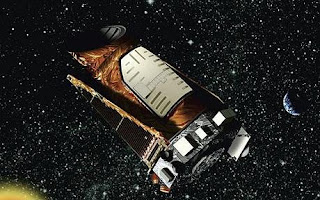 NASA have just launched their Kepler Space Telescope, a photometer telescope designed to search for Earth-like planets orbiting other stars. Kepler will observe the brightness of over 100,000 stars over three and a half years to detect if planets similar to earth may orbit them. Kepler does not work like a normal telescope but uses a method known as the "transit method of planet finding". Essentially, when we see a planet pass in front of its parent star it blocks a small fraction of the light from that star. When that happens, we say that the planet is transiting the star. If Kepler sees repeated transits at regular times, is has discovered a planet! From the brightness change it can tell the planet size. From the time between transits, it can tell the size of the planet's orbit and estimate the planet's temperature. These qualities determine possibilities for life on the planet. Current orbiting telescopes can only see massive planets similar in size to Jupiter, but Kepler is able to see planets 600 times smaller. The mission is named in honour of German astronomer Johannes Kepler. Dr. Stone wrote a piece on Johannes Kepler several months back after attempting to gain entry into the Kepler Museum in Regensburg in Germany and you can read about his life and works by clicking here. Below is a simulated video of the Kepler Mission Launch from You Tube.