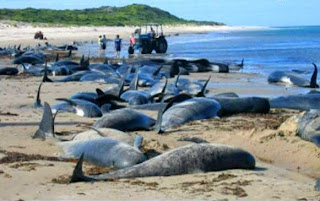 Nearly 200 pilot whales and six bottle nose dolphins remarkably beached themselves on King Island, in the Bass Strait in Australia. Nearly 140 of the whales have already died in what is described as an unprecedented event. But this is not the first time such an event has happened in the area, with nearly 400 whales beaching in Tasmanian waters over the last couple of months alone. The whales and dolphins became stranded on Sunday evening and authorities are now fearing some form of human involvement in the incident. For more information check out The Times Online for a full report and a video link.
Labels: Fragile Earth Today's Science News