Science Fact of the Week 13 - The Milky Way 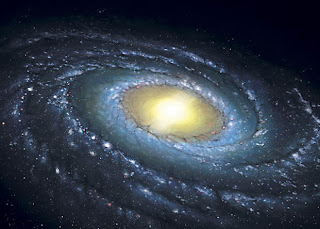 A galaxy is a system made up of billions of stars, like our Sun, and there are probably more than one hundred billion galaxies in the observable universe. Earth is found in The Milky Way galaxy which consists of at least 200 and maybe as many as 400 billion stars. It is spread out as a thin disk, and from the outside it would look like a spiral galaxy (as shown above in an artist’s depiction). The Milky Way is about 100 000 light years across. The fact that it divides the night sky into two roughly equal hemispheres suggests that our Solar System lies close to the galactic plane. Our galaxy is visible from Earth as a band of light in the night sky, but the low surface brightness makes it difficult to see due to light pollution. Andromeda is the nearest spiral galaxy to us and it is about twice as big as the Milky Way. The Milky Way and Andromeda galaxy are on a collision course, and in a few billion years the two galaxies will make their first close encounter. The oldest star in the Milky Way is estimated to have an age of 13.2 billion years, nearly as old as the Universe itself. The Universe is estimated to be 13.7 billion years old, with an uncertainty of about 200 million years. There should be hundreds of dwarfs, small galaxies, gravitationally bound to the Milky Way, but only about 20 dwarfs have been observed. Scientists have been puzzled about the missing galaxies, and now it has been suggested that the galaxies are there, but we simply cannot see them because they owe their existence to cold dark matter. This matter does not emit any light, so you cannot observe it directly.