Science Fact of the Week 14 - Why Ireland Has No Snakes! 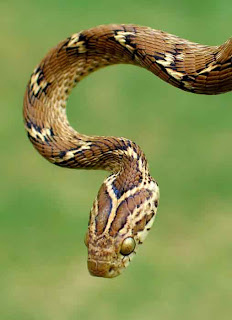 Today is St. Patrick's Day and everyone knows how St. Patrick drove all the snakes from Ireland sometime back in the 5th Century. But there may be other explanations for our inherent lack of legless reptiles (we have, of course, only one reptile in Ireland, the Viviparous Lizard, see previous blog post). It's true to say there are no native snakes in Ireland. In fact, there never were any snakes here. So, why not?
Snakes first evolved from their lizard ancestors about 100 million years ago during the late Cretaceous Period, about the same time that Tyrannosaurus rex first appeared. Early snakes were small and wormy, resembling modern blind snakes. Ancient snake fossils are found only on southern continents, suggesting that snakes first radiated from Gondwanaland — a former super-continent comprising modern-day Antarctica, South America, Africa, India, and Australia. Migrating to Ireland wasn't an option at this time, as the area was completely underwater. Now snakes are found in deserts, grasslands, forests, mountains, and even oceans virtually everywhere around the world. Everywhere that is except Ireland, New Zealand, Iceland, Greenland, and Antarctica. One thing all of the few snake-less parts of the world have in common is that they are surrounded by water. New Zealand, for instance, split off from Australia and Asia before snakes ever evolved.
Another plausible reason for the lack of snakes in Ireland is the weather. It's quite cold here but just 12,000 years ago we were in the midst of the Nahanagan Stadial - with full blown 'ice age' conditions. The ice age began about 2.5 million years ago and, technically, continues into the present. During this time there have been alternating cold and warm periods (stadials and interstadials), and glaciers have advanced and retreated more than 20 times, often completely blanketing Ireland with ice. Snakes, being cold-blooded animals, simply aren't able to survive in areas where the ground is frozen year-round. Ireland thawed out for the last time only 11,500 years ago. Since then, 12 miles (19 km) of icy-cold water in the Northern Channel have separated Ireland from northern Britain (Scotland) which has adders and, in warm spells, grass snakes. In southern Britain, a third native species, the smooth snake is also found. So, there are no snakes in Ireland for the simple reason that they can't get here, and probably never did - as no fossil snakes have been found here either.
So where did the myth of St. Patrick and the snakes come from? Most scholars agree that snakes symbolize paganism, which St. Patrick is also credited for banishing from Ireland. Snakes, as symbols of evil, are prevalent throughout Christian mythology, most notoriously in the Garden of Eden as a tempter of Eve.