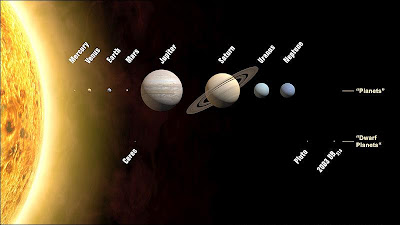 The icy planet of Pluto is the ninth and furthest planet from our sun. The planet Pluto is also the smallest in our solar system; it is even smaller than many of the moons that orbit other planets. While attempting to locate the cause of Neptune’s orbital interruption, Clyde W. Tombaugh discovered Pluto on this date, March 13th, 1930. While mistaken in his belief that Pluto was the planet causing the disturbance, Tombaugh was correct about its presence. However, in 2006, the International Astronomical Union (IAU) formally downgraded Pluto from an official planet to a dwarf planet. According to the new rules a planet meets three criteria: it must orbit the Sun, it must be big enough for gravity to squash it into a round ball, and it must have cleared other things out of the way in its orbital neighbourhood. The latter measure knocks out Pluto and neighbouring dwarf plantet Eris, which both orbit among the icy wrecks of the Kuiper Belt. Pluto was named after the Roman god for the underworld, possibly because of the distance from the Sun.

The planet Pluto has yet to be visited by a spacecraft. However, NASA is hoping that the New Horizons craft will reach the planet on July 14th, 2015. We do know that Pluto is a dwarf planet made up mostly of ice. Like its atmosphere, this icy surface is composed of Nitrogen, Methane and Carbon Monoxide. Pluto is 4.34 billion km from earth and has a diameter of 2,301 km, making it roughly 400 times smaller than Earth and only 70% the mass of the Moon. Pluto itself has one moon, Charon. Pluto's unusual 90,613 day orbit causes an anti-greenhouse effect through freezing and sublimation. Unusually, it's orbit sometimes brings it closer to the sun than Neptune. This occured in 1989 and it then remained ahead of Neptune for 10 years. It won't happen again until 2226.

Labels: Astronomy On This Day