Most Distant Object in Universe Spotted 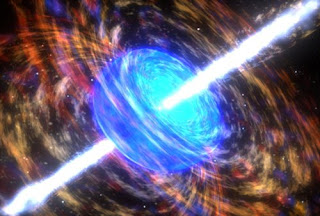 Astronomers have spotted the most distant object yet confirmed in the universe – a self-destructing star that exploded 13.1 billion (thousand million) light years from Earth. It detonated just 640 million years after the big bang. The object is a gamma-ray burst – the brightest type of stellar explosion. Gamma-ray bursts mark the dying explosion of large stars that have run out of fuel. The collapsing star cores form either black holes or neutron stars that create an intense burst of high-energy gamma-rays and form some of the brightest explosions in the early universe. A light-year is the distance that light can travel in a year, or about 6 million million miles. So astronomers are seeing this particular burst as it existed 13 billion years ago, because the light took that long to reach Earth. It was spotted by NASA's Swift satellite on April 23rd.
Labels: Astronomy Today's Science News