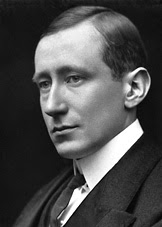 On this day in 1874 Guglielmo Marconi was born in Bologna. He pioneered the use of radio waves for communication, introduced the first microwave radiotelephone system (allowing the Pope to keep in touch with the Vatican when at his Summer residence), was first to outline the principles of radar, and was awarded the Nobel Prize for Physics in 1909.

Marconi’s father was an Italian “country gentleman”, and his mother (nee Jameson - as in the whiskey people) was Irish – and grew up in Daphne Castle, County Wexford. Guglielmo had a comfortable childhood, and was educated privately in Italy. From an early age he took an interest in Physics, and when he was 21 he set up a wireless system in his father’s country estate at Pontecchio, which could transmit over 1½ miles. A year later he took his system to London to look for sponsorship and support – eventually setting up ‘Marconi’s Wireless Telegraph Company Ltd.” in 1900. In 1901 he transmitted across the Atlantic using radio waves, from Poldhu in Cornwall to St. John’s Newfoundland (a distance of 2,100 miles). This led to the establishment of a commercial transatlantic radio link in 1907 between Clifden in Connemara and Glace Bay, Nova Scotia in Canada. For many years the standard domestic radio receiver was made by the Marconi Company - hence Michael’s opening speech in Brian Friel’s wonderful play “Dancing at Lughnasa”.

"When I cast my mind back to that summer of 1936 different kinds of memories offer themselves to me. We got our first wireless set that summer -- well, a sort of a set; and it obsessed us. And because it arrived as August was about to begin, my Aunt Maggie -- she was the joker of the family -- she suggested we give it a name. She wanted to call it Lugh after the old Celtic God of the Harvest. Because in the old days August the First was La Lughnasa, the feast day of the pagan god, Lugh; and the days and weeks of harvesting that followed were called the Festival of Lughnasa. But Aunt Kate -- she was a national schoolteacher and a very proper woman -- she said it would be sinful to christen an inanimate object with any kind of name, not to talk of a pagan god. So we just called it Marconi because that was the name emblazoned on the set."

Marconi truly changed the nature of long distance communications, and was bestowed with honours in his later life. He joined the Italian Fascist Party in 1923, and in 1927 Benito Mussolini was best man at his (second) wedding. Marconi died in Rome on July 20th 1937, and radio stations worldwide observed a two minute silence as a sign of respect.
Labels: Famous Irish Scientists On This Day People in Science Technology