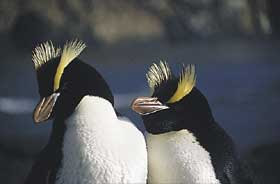 Crested penguins all have flashy yellow or orange crests on the sides of their heads and red or reddish-brown eyes. Their beaks are red or orange in colour. However, there is a large variety of species classified as "crested", which all look very similar, and some appear on only a small number of islands in a very narrow range. The main differences between the species are size, shape and colour of the crest.
The Erect Crested Penguins are found only on the islands surrounding southern New Zealand. There are large numbers of them on Bounty, Antipodes and Campbell islands. The erect-crested penguins have long, silky feathers that stand straight. Spiky brush-like feathers grow from the base of the bill to the top of the head giving this penguin a distinct look. They can also raise and lower these feathers on the crest, which none of the other crested penguins can do. These birds are very sociable and nest in large colonies located close to colonies of Rockhoppers, another crested penguin. The total world population is about 200,000 breeding pairs. Their nests are shallow holes in the ground, which they line with plant material if available. After mating two eggs are laid but usually only one chick survives.
Labels: Nature Notes Penguin Corner