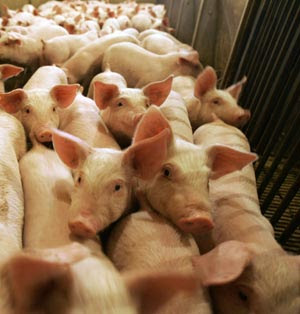 Swine Flu is caused by influenza type A virus, there are regular outbreaks among herds of pigs, where the disease causes high levels of illness but is rarely fatal. It tends to spread in autumn and winter but can circulate all year round. There are many different types of swine flu and like human flu, the infection is constantly changing. Swine flu does not normally infect humans, although sporadic cases do occur usually in people who have had close contact with pigs. There have also been rare documented cases of humans passing the infection to other humans. Human to human transmission of swine flu thought to spread in the same way as seasonal flu – through coughing and sneezing. In the latest outbreak, in Mexico, it is clear that the disease is being passed from person to person. The outbreak in Mexico seems to involve a new type of swine flu that contains DNA that is typically found in avian and human viruses. The World Health Organisation has confirmed at least some of the cases are caused by this new strain of H1N1. It is genetically different from the fully human H1N1 seasonal influenza virus that has been circulating globally for the past few years. It contains DNA that is typical to avian, swine and human viruses, including elements from European and Asian swine viruses. 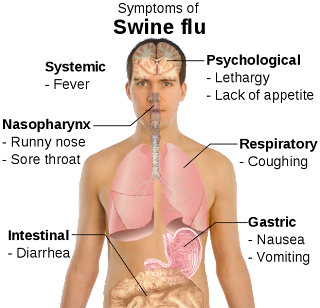 Symptoms of swine flu in humans appear to be similar to those produced by standard, seasonal flu. These include fever, cough, sore throat, body aches, chills and fatigue. Most cases so far reported around the world appear to be mild, but in Mexico lives have been lost. Is it safe to eat pig meat? Yes. There is no evidence that swine flu can be transmitted through eating meat from infected animals. However, it is essential to cook meat properly. A temperature of 70C (158F) would be sure to kill the virus.
Scientists have long been concerned that a new flu virus could launch a worldwide pandemic of a killer disease. A new pandemic flu virus could evolve when different flu viruses infect a pig, a person or a bird, mingling their genetic material. The resulting hybrid could spread quickly because people would have no natural defences against it. The most notorious flu pandemic is thought to have killed at least 40 million people worldwide in 1918-19. Two other, less deadly flu pandemics struck in 1957 and 1968.
This, by the way, is the Frog Blog's 200th post! Well done us!
Labels: Ag. Science News Class Discussion Science Fact of the Week Today's Science News