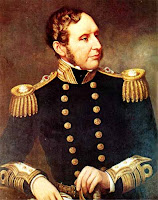 Robert Fitzroy was a British naval officer, hydrographer, and meteorologist who commanded the voyage of HMS Beagle, on which Charles Darwin sailed around the world as the ship's naturalist. That voyage provided Darwin with much of the material on which he based his theory of evolution (Click here to see a previous post about the voyage of the Beagle). Fitzroy retired from active duty in 1850 and from 1854 devoted himself to meteorology. He devised a storm warning system that was the prototype of the daily weather forecast, invented a barometer (called the Fitzroy Barometer), and published The Weather Book (1863). His death was by suicide, on this day in 1865, during a bout of depression. 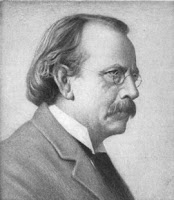 Also on this day, in 1897, Joseph John Thompson announced the existence of the electron. Thompson made the announcement at the Royal Institute claiming he had found a particle 1000 times smaller than the atom, which he called corpuscles (meaning small body). Despite being a well respected scientist of the time, many of his fellow colleagues didn't take too well to the theory as it was widely believed the atom was indivisible.
Labels: Chemistry Stuff Darwin's Bicentenary On This Day People in Science