The Octopus by Philip Blackley 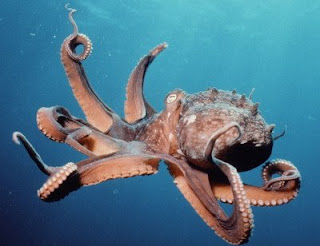 The octopus is part of the Phylum Mollusca, belonging to the class Cephalopoda. This class of molluscs have their muscular foot in the form of tentacles on their head. Most cephalopods are active predators and eat other living things. They do not have external shells, except the nautilus, and they are the most intelligent of the invertebrates. They all move by jet propulsion.

The word octopus is of Greek origin and it means “eight-footed”. It has eight flexible arms (or "feet"), which trail behind it. Most species of octopus have no rigid skeleton and this allows them to squeeze through tight spaces. An octopus has a hard beak with its mouth in the middle of its arms. They are bilaterally symmetrical with two eyes and four sets of limbs, like all other cephalopods. They are very intelligent creatures. In the wild they can build traps and to escape from predators they spit out an inky-black substance and some can even change colour to blend in with their surroundings such as the Blue-Ringed Octopus.... See the remainder of Philip's project below. Philip is currently out of school. Get well soon.