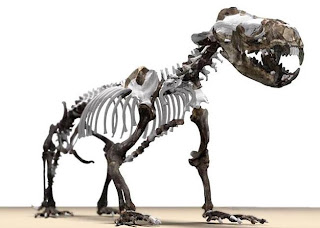 The skeleton of a mammal (reconstructed above) has been unearthed in Canada, which may prove to be the missing link between seals and otters. The discovery of the skeleton, which is thought to have had webbed feet, may shed light on how mammals made the transition from land to water and ultimately in the understanding of how seals and walruses first evolved. The mammal would have lived approximately 23 million years ago and is thought to have walked upright on land but swam in fresh water to hunt. It is the oldest seal ancestor found so far and has been named Puijila darwini. Puijila is the term for "young sea mammal" in the Inuktitut language, spoken by Inuit groups in Devon Island where the fossil was found. The reference to Charles Darwin is in recognition that he had predicted such a "missing link" in the Origin of Species 150 years ago: "A strictly terrestrial animal, by occasionally hunting for food in shallow water, then in streams or lakes, might at last be converted in an animal so thoroughly aquatic as to brace the open ocean". 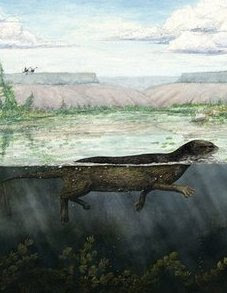 In yet another illustration of the serendipitous nature of scientific research and understanding, it appears that the discovery of this important skeleton by geologist Natalia Rybczynski was entirely accidental. The story is that she was on the way to look at a nearby meteor impact crater when her vehicle ran out of fuel and ground to a halt. It was while she was waiting for team members to return with fresh fuel supplies that the first bone was discovered!