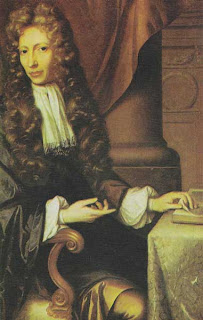 Born in Lismore Castle, Co Waterford, on the 25th January 1637, Robert Boyle is regarded by many as the founder of modern chemistry. He was born into a wealthy family, his father Richard was the first Earl of Cork. He was an excellent pupil and quickly learned six languages fluently. He attended Eton College before travelling through Europe as a teenager with a tutor. He is thought to have met Galileo while in Florence which prompted him to study astronomy and mechanics. On his return to Ireland he learnt of his father's death, and inherited a very large fortune as well as land in Ireland and England. Being financially secure, he set about using his money to study science.
His greatest achievements are in the study of the mechanics of air. He is probably most noted for his law concerning air volume and its relationship with pressure and temperature. To be precise, Boyle's Law states that "the volume of a given quantity of gas varies inversely with the pressure when the temperature is constant". Essentially, he is stating that if you double the pressure on a sample of gas, it's volume will half. He is also regarded as being one of the first to establish a real "scientific method", insisting experimental results should always be repeatable. He also was one of the first to propose the modern concept of elements, attacking the 2,000-year-old Aristotelian theory of four elements - earth, air, fire and water. He was friendly with Sir Isaac Newton, who shared Boyle's interest in Alchemy. He was also a keen theologian.
Robert Boyle died on the 30th December 1691 of paralysis but in his will he endowed a series of lectures, called the Boyle Lectures, where prominent academics could discuss the existence of God. These still continue today.
Labels: Chemistry Stuff Famous Irish Scientists People in Science