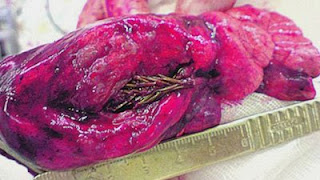 It was reported last week that an otherwise healthy 28 year old Russian man was found to have a small fir tree growing in his lung tissue. He had originally been diagnosed with lung cancer after coughing up blood and suffering severe chest pains. X-rays confirmed a growth in his lung and the decision was made to proceed with surgery. However, when the doctor made his initial incision, he found a small tree growing in the moist and warm conditions of the lung. It is unlikely, however, that Artyom Sidorkin, our man in question, actually swallowed a seed. While the seed could have germinated it would have needed light to grow to the stage it was found in (almost 5cm long). Mr. Sidorkin studies plants for a living and probably inhaled a piece of a branch during his work. On the bright side, Mr. Sidorkin is no longer considered to have lung cancer!
Labels: Today's Science News