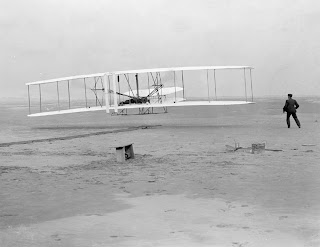 Todays marks the anniversary of the death of Orville Wright, the American pioneer aviator, who with his brother, Wilbur, invented the first powered airplane, Flyer, capable of sustained, controlled flight. At Kitty Hawk, North Carolina, Orville made the first ever manned powered flight, airborn for 12-sec. By 1905, they had improved the design, built and and made several long flights in Flyer III, which was the first fully practical airplane (1905), able to fly up to 38-min and travel 24 miles (39-km). Their Model A was produced in 1908, capable of flight for over two hours of flight. They sold considerable numbers, but European designers became strong competitors. After Wilbur died of typhoid in 1912, Orville sold his interest in the Wright Company in 1915. He died on January 30th 1948.
Labels: Feats of Engineering On This Day