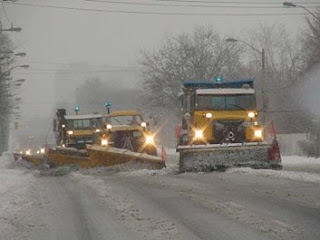 Everyone knows that when it snows and it is icy, the government make the choice of spreading salt, to give grip and help melt and weaken the icy layer. Ireland has found three home- grown experts on the subject. These three young students were found and recognised at the BT YOUNG SCIENTIST AND TECHNOLOGY EXHIBITION being held at the RDS now. These students have found and made a new road salt mix that works better than the salt used during the period of snow, it would have also cost less. The three students and inventors are Emily Long (16), Fionnuala Kennedy (15) and Julianne O’Connell (15) from Presentation Secondary School, Thurles, Co. Tipperary.
This new salt mix was designed especially for Irish conditions and would have been more environmentally friendly. It also would be able to melt the ice just as quick, and able to keep irish road surfaces from freezing again from - 18 degrees. Each of the students carried out a detailed study on the various salts, learning that molasses is sometimes used along with salts to decrease icy roads in Canada. However they decided to look at salt formations better suited for Ireland. Their final result was a mixture that could de-ice faster, cause less damage and keep roads clear at the temperatures experienced in the country last week.
By Zuleika O’Malley, Form IV
Labels: Today's Science News

Susan at Stony River said…
Wow. Well done! We need more thinkers like these three -- and then we need a government who'll listen to common sense and try it next winter.
(ah, good luck with that last...?)

Anonymous said…
Wow well done girls! Ye simply are amazing! Great idea and best of luck in the future. Ye should have won!