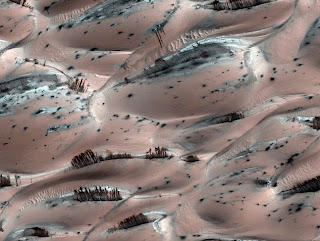 NASA scientists have apparently discovered some sort of “tree” like images on mars. This encounter seems to have had some sort of an impact on this the on-going talk of life on mars and has sparked a few worried faces. “Trees” have turned out not actually to be “Trees!” Pictures of mars, which is known to be just over 62 miles away actually showed images of trails of displaced sand. This is due to the winter months causing the carbon dioxide ice to cloak the sand dunes, during the spring this ice melts causing the dark black streaks to run down the side; Thus, causing an amazing effect on the sand…a “tree-like” effect. Or not? This again shows that Mars is quite similar to earth, and its climatic effects, as both planets have both undergone a massive amount of climate change in the last million years. To read more, please click here.
By Aoise Keogan Nooshabadi, Form IV
Labels: Today's Science News

Susan at Stony River said…
Thanks for that news and link!

When I was a school student, the first space shuttle lifted off and I can't tell you the excitement -- half the class wanted to become astronauts. All of us were sure we'd be on Mars and colonising the Moon by 2010, and here it is...