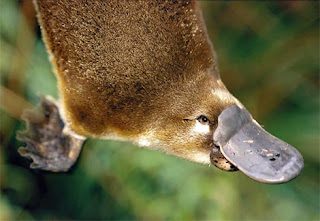 Duck-billed platupus are one of the few venomous mammals. The male can deliver a sting that causes immediate, excruciating pain, like hundreds of hornet stings. Scientists are making progress into what is actually in its deadly cocktail. Scientists previously showed that the venom triggers certain chemical changes in cultured human nerve cells that can lead to the sensation of pain. Until now, however, scientists did not know the exact components of the venom responsible for this effect. Recently, scientists collected samples of platypus venom and used high-tech instruments to separate and characterize its components. They identified 11 new 'peptides', or protein subunits, in the venom. Studies using nerve cells suggest that one of these substances, called 'Heptapeptide 1', is the main agent responsible for triggering pain.
By Tom Gibbs, Form IV
Labels: Today's Science News