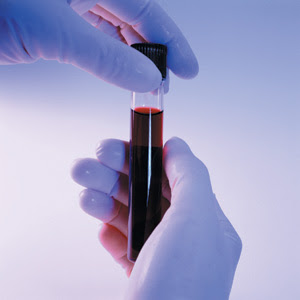 The quest to create artificial blood is big business, with more than £1 billion being spent over the last 20 years in an attempt to create a true alternative to blood. Among those around the globe seeking a viable blood alternative are scientists at the University of Essex who have just submitted a worldwide patent for their engineered hemoglobin. Over 75 million units of donated blood are given to people worldwide for use in hospitals. However, there are growing concerns about its use in routine operations. A true blood substitute would be very useful as it could have a long shelf life, be stored away from hospitals, need not be matched for blood group and be guaranteed free of contamination by any present or future viruses.
The starting materials for blood substitutes have included chemicals used to help make atom bombs, cow blood and blood grown in bacteria. However, to date the world's scientists have failed to produce a safe alternative to blood. The reason for this failure, according to Professor Chris Cooper, a biochemist and blood substitute expert at the University of Essex, lies in hemoglobin, the red molecule inside blood cells that carries oxygen around the body. "Basically, hemoglobin produces free radicals that can damage the heart and kidneys," explained Professor Cooper. "The trick with artificial blood is to modify the molecule to be less toxic, but still perform the vital role of carrying oxygen around the body. No one has managed this yet." What makes Professor Cooper's group engineered hemoglobin so special is that it is less toxic. Professor Cooper's work on blood substitutes is funded by UK government research councils in Biotechnology and Biological Sciences (BBSRC) and Engineering and Physical Sciences (EPSRC).
By Natalia Izquierdo Garcia, Form IV
Labels: Today's Science News