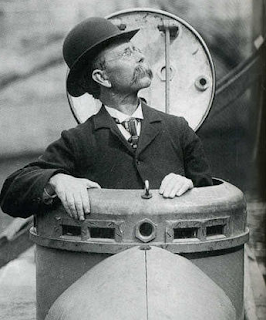 John Phillip Holland was born in 1841 in Liscannor, Co.Clare. It was John Holland who developed, in America, the first modern submarine which could travel 800km on the surface of the sea and 40km submerged.
John was a teacher in Ireland until 1872, when he emigrated to the USA, where he taught in Paterson, New Jersey, until 1879. He drew up plans of submarines and, in 1879, with funds by the Fenians, built a small submarine which successfully operated submerged. He formed a company in 1895 and was awarded a contract to build a submarine for the US Navy. His first boat was a failure, but his second passed Navy tests. It had a gasoline engine for surface propulsion and an electric motor fed by storage batteries power when submerged. The arrangement of tanks to be flooded to submerge the boat was similar to that used in modern submarines. His submarine was purchased by the US Navy in 1900.
It was not until after his death that Holland became widely recognised and renowned as the inventor of the modern submarine. In 1964 a plaque was erected in Liscannor to commemorate the fiftieth anniversary of his death.
Labels: Famous Irish Scientists Great Inventions

Eoin Lettice said…
Holland was (for a time) a Christian Brother and taught at my own Alma Mater, North Monastery CBS, Cork.
The 'North Mon' celebrates 200 years in 2011 and Holland will be remembered in conjunction with the National Maritime College of Ireland at Ringaskiddy, Co. Cork.
10:06 pm