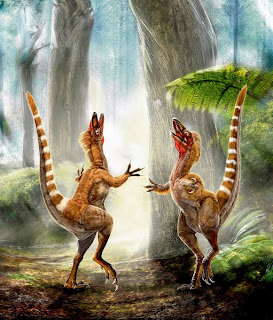 A group of scienists, some based in Univeristy College Dublin, have revealed the lost colours of feathered dinosaurs. The first solid proof of pigmentation has been spotted in the fossils of dinosaur tail feathers of a relatively small meat-eating dinosaur found in China and named Sinosauropteryx. It was a red ginger colour, with an unusually stripped tail. The finding also provides further conclusive evidence that some dinosaurs had feathers, further linking them to birds, say some analysts. For more information on this study, click here to see an article from yesterday's Irish Times.
Labels: Dinosaurs Today's Science News