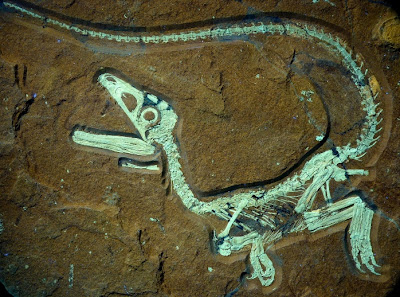 Palaeontologists have unearthed an almost fully intact dinosaur skeleton in Germany. The fossil of the young theropod is almost 98% complete and represents the best preserved dinosaur skeleton ever found in Europe. Fossils of theropod dinosaurs, which include Tyrannosaurus, are generally rare and usually fragmented. The best-preserved Tyrannosaurus  for example is only about 80 percent preserved. This find also includes some remain of the dinosaur's skin and protofeathers - fuzzy, filament-like precursor to feathers seen in other theropods.


This particular dinosaur is believed to have died around 135 million years ago and his team of palaeontologists think it was no more than a year old. It is still undisclosed what species of dinosaur the fossil represents.

The fossil was revealed by scientists from the Bavarian paleontological and ecological collections (BSPF) in Munich, Germany
Labels: Dinosaurs Today's Science News