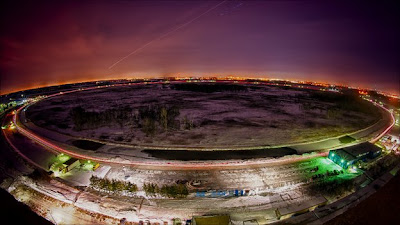 The Tevatron particle accelerator near Chicago - the US equivalent of CERN's Large Hadron Collider - has closed down, due to the cessation of capital funding. For the past 26 years, the Tevatron atom smasher has been delving into the secrets of subatomic particles - the tiny building blocks of our universe.

The Tevatron, which accelerates and collides protons and antiprotons in a four-mile-long (6.28 km) underground ring has been superseded by the much larger LHC, under the French-Swiss border, which is capable of creating much higher energies than the US project. Physicists at the U.S. lab will now turn to smaller, more focused projects — such as building the most intense proton beam — as they pass the high-energy physics baton to CERN's bigger, better atom smasher.

Tevatron’s greatest achievement is arguable the discovery of the top quark in 1995, the heaviest elementary particle known to exist. Though it is as heavy as an atom of gold, the top quark’s mass is crammed into an area far smaller than a single proton.

While the Tevatron will no longer be running experiments, the scientists there have not given up hope of making a major contribution to finding the Higgs boson – thought to be the agent which turned mass into solid matter soon after the Big Bang that created the universe 13.7 billion years ago.