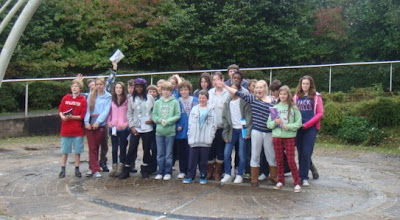 Setting off bright and early Wednesday morning, more or less on time, the school's youngest pupils were full of chatter for most of the way to the exciting and hugely impressive Armagh Planetarium. There the pupils and teachers were treated to a video of the stars and planets in our solar system and then a second video about the effects of space on the human body - both treated to a series of "Ah's" from the pupils.

After the impressive videos the pupils took part in a rocket building workshop -  which went down a treat especially launching the rockets. Each team had a most successful set of launches and it was impossible to pick a winner as all of them flew so far. After lunch the pupils were reassigned to outdoor duty - the planetarium's 'planet park' where the kids were split into groups and each group was assingned a planet to collect information about in preparation for making a presentation, without notes, later in the evening. They all set about this enthusiastically.

Later in the afternoon, the pupils visited the Ulster Transport Museum in Hollywood, although they didn't have enough time to explore the centre fully so, instead, spent a lot of time arriving visiting the Titanic Exhibition - which proved very popular.

Setting off from Hollywood, we made for the ferry at Strangford. This again caused great excitement especially when we let them out onto deck. When we got to Barholm House we found it totally refurbished and under new management. Supper was of a very high standard and so was this mornings breakfast. Next came the presentations. All the groups had used teamwork each individual contributing to the presentation and the standard was amazingly high, especially as they were not allowed to use notes. The prize for best presentation was won by Penny Nash, Max Hillary and Ralph Sweetman for a very well researched and presented talk on Saturn. After that we watched a video and thence to slumber - after a lot more chattering.
Labels: Science Field Trips Science Trip Reports