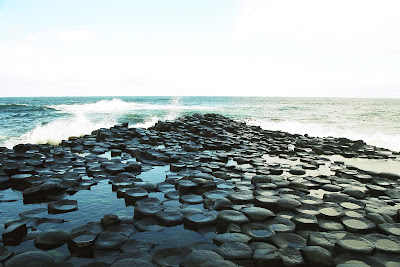 Some of the oldest known fossils in the world are colonial structures produced by some of the smallest living things that have ever existed - the stromatolites. Stromalotites are colonies of tiny blue green algae or cyanobacteria that are thought to be some of the most ancient life form that is still around today, after more than three billion years. The blue-green algae that form the stromatolites helped create our present atmosphere by breaking down carbon dioxide and excreting oxygen. Their appearance on this planet is seen as a turning point in the earth's evolution.

These days stromatolites are only found in warm and often hyper saline waters, conditions which discourage predators, but now scientists from the University of Ulster have made a remarkable finding - the existence of stromatolites amongst the basalt pavements in the Giant's Causeway in Northern Ireland. Found is a tiny brackish pool on a remote corner of the Giant's Causeway, fully exposed to the violence of waves and easy prey to the animals that are already living amongst them, the discovery is hugely significant. It is expected that  further detailed analysis of the stromatolites will be carried out over the coming weeks and months and that the a search for similar colonies will begin around the Irish coast.

The blog, Why Evolution is True, has an excellent piece on this remarkable finding. To find out more about stromatolites click here.
Labels: Geology Today's Science News