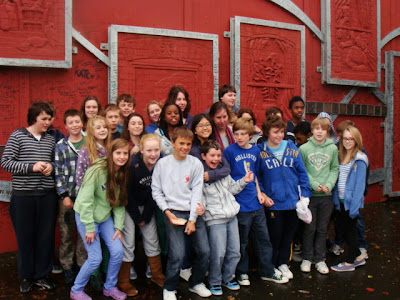 Day two started bright and breezy. We all enjoyed a full Irish breakfast with potato scones before heading for W5 in Belfast. The new Titanic interpretive centre looks fabulous with its silver bow shaped cladding representing the Titanic and its sister ships. The first activity of the day was a chemical reactions workshop where they did exothermic and endothermic reactions, neutralisation and the screaming jelly baby experiment. This was greatly enjoyed by all. Next we went into the main exhibition areas where all the pupils had great fun trying the numerous interactive exhibits for over an hour. We ate lunch in W5 and as we made our way to the bus we had a close look at the ‘Seacat’ a catamaran ferry.

Just as we were setting off for the Wildfowl and Wetlands Trust centre at Castle Espie the heavens opened. Fortunately our driver Wayne offered to take us on a tour of Belfast. He took us down the Falls Road and the Shankill Road with their numerous colourful murals and explained much of the history of the area during the recent troubles. We stopped at the Peace Wall and disembarked to examine and sign the wall. The pupils were particularly intrigued by the Europa Hotel; the most bombed hotel in the world. He also showed us HMS Liverpool one of the only two remaining ships to have fought in the battle of Jutland during WWI and the two giant Harland and Wolf cranes affectionately called ‘Samson and Goliath’.

The deluge continued but we set off for Castle Espie. As we pulled into the car park the rain miraculously stopped. John McCulloch the education officer met us and took us on a guided tour. We saw the Hawaiian Goose and the Marbled Teal whose population has been decimated by Saddam Hussein when he diverted the Tigris to drain the southern marshes in an effort to dislodge the local population of Marsh Arabs. We then went to the main hide and saw a large proportion of the 23 700 Brent Geese; the vast majority of the world’s population. John explained the ins and outs of their migration and fielded some very interesting questions from the pupils.

Next we saw a Neolithic house and several other lesser attractions including the world’s most expensive toilet. It was the back to the hostel for a tasty dinner followed by an hilarious game of Twister using questions based on the day’s activities. Another fantastic action packed day.
Labels: Science Field Trips Science Trip Reports