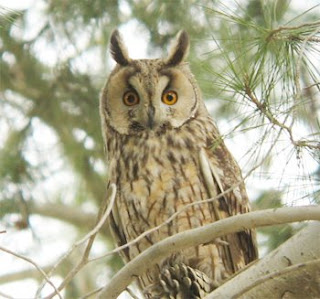 Long-eared Owls are the most common owl in Ireland, with a scattered range throughout the country. They are found in woods, copses and coniferous plantations adjacent to open grassland where they hunt mice, rats, shrews and voles. They get their name from their long ear tufts, which are located above the facial disc, giving them a cat-like appearance. These are raised when the owl is alarmed or curious but lie flat when the owl is relaxed or flying. They have a handsome mottled brown coloured plumage (feathers) over most of the body and are well camouflaged. The eyes are a fiery orange, encircled by black feathers set into an orange facial disc. The forehead and lores are a mottled grey-white and the bill is black. They are a medium sized owl averaging 35 - 40 cm in length and a maximum of 350g (females are heavier than males).
Long-eared Owls typically lay 3-5 white eggs from late March onwards and these are incubated for 25-30 days. The chicks typically hatch out over a period of 10 to 12 days and fledge at about five weeks. They remain dependent on their parents until about two months old. In Ireland local populations of Long-eared Owls can be threatened by loss of rough grassland, and increased pesticide use which may reduce prey numbers. The felling of conifer plantations during the breeding season should also be avoided. However as a breeding species the Long-eared Owl is generally doing well and is not listed as being of conservation concern. It is estimated that Ireland may hold 1,000 -3,500 pairs of Long-eared Owl.
Labels: Ireland's Birds of Prey Ireland's Fauna Nature Notes