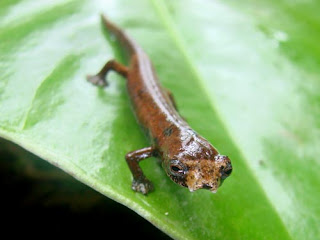 The Frog Blog reported earlier this year (here and here) on new species of frog that were discovered in Madagascar and Panama respectively. The Frog Blog now hears that more new amphibian species have been discovered near the border of Peru and Ecuador, in the Cordillera del Cóndor, an outlier of the main Andean chain which rises to a maximum elevation of about 2900 metres. Because of its geographical seclusion from the rest of the Andes, the Cordillera is thought to be home to many unique species that have evolved in isolation. Amongst the new species discovered are a bug-eyed salamander (shown above, which we think looks a little like ET), a tiny, endangered poison arrow frog, a colourful, polka-dotted lizard and a number of bizarre-looking crickets. They also found a number of endangered species including Hyalinobatrachium pellucidum, a glass or crystal frog that has translucent skin.
Labels: Extra Froggage Today's Science News