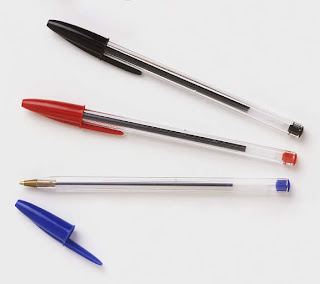 Today, in 1943, the ball point pen was patented by Laslo Biro. He had invented the pen with quick-drying ink in 1938 while Biro was a journalist in Budapest, Hungary, where he was also a sculptor and hypnotist of all things. Biro escaped the Nazis by travelling via Paris to Argentina in 1940. There, Englishman Henry Martin, in Buenos Aires on a mission for the British government, saw the invention and recognized its value for air crews making high altitude navigational calculations. This new type of pen would write blot-free, unaffected by low or changing atmospheric pressure. Martin aquired the rights and began small scale production of ballpoint pens for the RAF. Commerical production under Biro's patents began in 1945 by the Eterpen Co in Buenos Aires.
Labels: Great Inventions On This Day