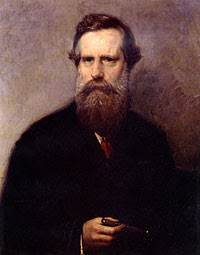 Today, in 1832, the British chemist and physicist William Crookes was born. Discovery of the element thallium is attributed to him, and he also showed that cathode-rays were fast-moving, negatively-charged particles. He invented the Crookes' Radiometer (shown below) in 1875, in which four vanes suspended on a needle in a vacuum with one side black and the other side white, are observed to rotate by the effect of incident light. This verifies that light is indeed a form of energy and can do work. Crookes also identified the first known sample of helium, in 1895. He invented the spinthariscope in 1903 which reveals alpha particles emitted by radium.

He also had a fascination with ghosts and spirits and conducted experiments in his home with mediums. There he reported to have witnessed several unexplained phenomena, including levitation and viewing of "phantom figures". Many of his claims were discredited by his scientific peers although he continued to air his views and had some well known supporters, including Alfred Russell Wallace, the co-developer of the Theory of Evolution.
Labels: On This Day People in Science