Science Fact of the Week 22 - Structure of Planet Earth 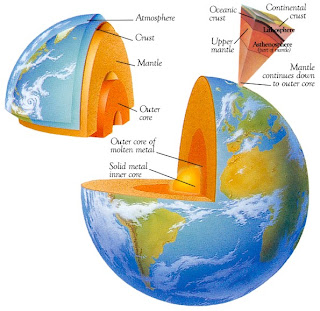 For thousands of years humans have wondered about the Earth beneath their feet. The ancient Greeks and Romans had a vision of Hades, an underworld peopled by the dead and ruled by the god Hades or Pluto. Medieval Christians believed in a fiery underworld ruled by Satan, where evil doers were sent after death for an eternity of torment. In 1864 the French pioneer of science fiction writing, Jules Verne, published Voyage au centre de la Terre, in which German professor, Otto Lidenbrock (or von Hardwigg in English versions), with his nephew Axel and their guide Hans follow a coded message from an ancient Icelandic manuscript and enter the underworld via the Icelandic volcano Snaefellsjökull, and hair-raising adventures ensue, before eventually re-emerging in southern Italy.
Our current understanding of the internal structure of planet Earth is a little more mundane, but none the less interesting for that. A cross-section through Earth would show a concentrically layered structure with an outer, solid, lithosphere consisting of crustal rocks and bits of upper mantle. This floats on a partially molten layer called the aesthenosphere, which itself sits on (generally) solid mantle rocks. At the centre of the Earth is an iron-rich core, divided into a liquid outer core and a solid inner core.

Evidence for the Earth’s structure comes from the refraction, reflection and travel times of earthquake waves as they pass through the interior. Sudden increases in wave velocities at a depth of about 5 km to 70 km mark the Mohorovičić discontinuity, between the crust and mantle. Shock waves produced by US nuclear weapons tests in Nevada helped to pinpoint the position of the Gutenberg discontinuity (2,900 km below surface), which separates the core from the mantle. The Earth’s strong magnetic field also suggests an iron rich core, as does the abundance of iron in meteorites which represent the original building blocks of planet Earth – floating around in space, virtually unchanged for the past 4,600 million years. The strength of the Earth’s force of gravity reflects the size and density of the planet, and modelling this with iron-rich rocks such as peridotite in the mantle gives results identical to those observed. Direct sampling of the mantle is virtually impossible, but occasionally plate tectonic processes throw a bit of mantle rock up onto the surface for us to examine e.g. the Ronda peridotite in .

Part of the crust consists of basaltic rocks forming a layered structure known as ophiolite. This makes up the oceanic crust, and is nowhere older than about 180 million years. As the name implies, it floors the deep oceans of the world. The other part of the crust consists of a mish-mash of igneous, sedimentary and metamorphic rocks, some of which may be almost 4,000 million years old. This is known as continental crust, and forms the world’s landmasses and shallow seas.
Labels: Geology Science Fact of the Week